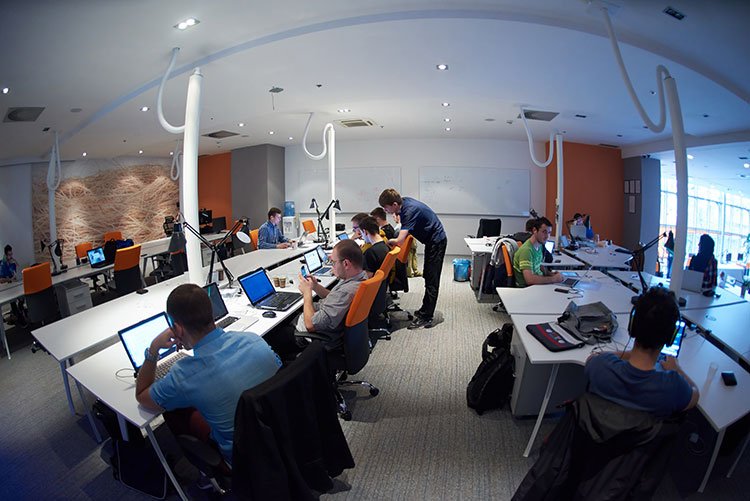 What is a Sound Making System?

Office Sound Masking Systems have been in wide use for more than 50 years They were developed in the 1960s for the department of defense, and have been used to provide improved acoustic privacy in office spaces ever since.

The basic idea behind sound masking is that if I fill in the sound spectrum, it makes it very difficult to understand the conversations going on around me. And if I can’t understand them, they’re much less likely to distract me. Thus, office sound masking systems both improve office privacy and increase office productivity.

The human ear works like a radar dish – constantly on the lookout for sound that indicates some kind of structure. Your ears are bombarded by sound all day long – and your brain has to filter out the useful sounds from the irrelevant ones. So it looks for structure. Language and music have structure, for example. The sound of a twig snapping or a door creaking communicates information that’s helpful to the food court at the mall, or other constant sounds like that of the cooling fan in your computer. The sound doesn’t vary, it doesn’t have structure, so your brain determines that it’s not communicating anything and so it ignores the sound and goes on looking for structured sounds.

Think of your office area like an inflated balloon at a birthday party. At every point inside that balloon, the pressure-per-square inch (PSI) is the same. The best sound masking solution for you will be the one that provides the most uniform sound masking to every point in the office.

Which Office Sound Masking System are the Best?

There are two primary types of sound masking systems: plenum systems and direct-field systems, and the latter are typically considered to be more effective. As acoustical expert David Sykes wrote for the Workgroup for Electronic Data Interchange (WEDI) points out, ‘[direct field systems] are the newest, lowest in cost, easiest to install, and have been in wide use since 1998.’

Originally, all sound masking systems were placed in a grid pattern above the suspended ceiling. Large loudspeakers were bolted to the concrete deck above, and hung on a chain. The speaker would then blast the sound upward at the concrete deck and bounce it around inside the area between the deck and the ceiling tiles, which is known as the plenum. Thus, these older-style systems were called ‘plenum systems.’ The idea was that the sound would bounce around and fill the plenum, and then filter down through the ceiling tiles into the office space below. This configuration was necessary 50 years ago, given the speaker technology available and the presence of relatively uniform ceiling structures and empty plenum spaces. This makes sense: speakers at that time were loud and had a pretty narrow dispersion angle, but if you can bounce the sound around a bit, it overcomes this limitation.

However, as plenum spaces filled up and ceiling assemblies became more complex, it became more and more challenging to truly get the sound to fill the plenum uniformly, much less filter down into the office space below in any uniform way. Now, a typical plenum space is filled with heating and air conditioning ducts, low-voltage and network cabling, and electrical and lighting conduit. Ceiling assemblies have become an acoustical nightmare of mix of reflective and absorbent materials, affecting both the spectrum and volume depending on where you stand. To compensate for this, many plenum systems developed increasingly complex ways to tweak their speakers (typically in 3-speaker zones). But – like a patch for a bug in computer program – this was ultimately just a band-aid solution.

So acoustical engineers kept working, and came up with the prototype for what would eventually become known as a ‘direct-field’ sound masking system. Realizing that the problem couldn’t be solved by continuing to patch the old way of doing things, they pulled the speakers out of the plenum. But simply using speakers designed to bounce sound around in the plenum wouldn’t do, since they used a relatively narrow dispersion angle. Using old-style speakers in a new configuration didn’t solve the problem, since it still resulted in non-uniform ‘hot and cold’ sports.

Finally – borrowing from the home theater industry, engineers developed a patented ultra-wide-angle dispersion speaker, which spread the sound out at a 170-degree angle. This turned out to be the key that unlocked a whole new level of effective office sound masking –and because the resulting direct- field system is simpler, removing the variables of humans to tune the system and elaborate technological systems with their added failure points, it had an almost nonexistent failure rate.

Contact us for Sound Masking and Network Cabling services.