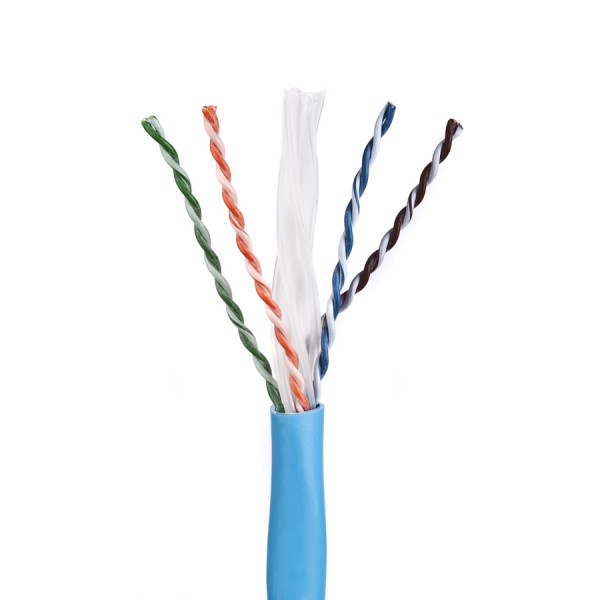 Today we are going to discuss different types of data cables that were or are being commonly used in commercial or residential areas. If you want to buy an ethernet cable for any reason, you may have noticed that there are several different types to choose from. The most common being Cat5e or Cat6 or Cat6a Cable. Why there are so many different data tables in the market and what are they used for? For ethernet cable, Cat means Category and different number represent different standards and specifications for each type of cable. 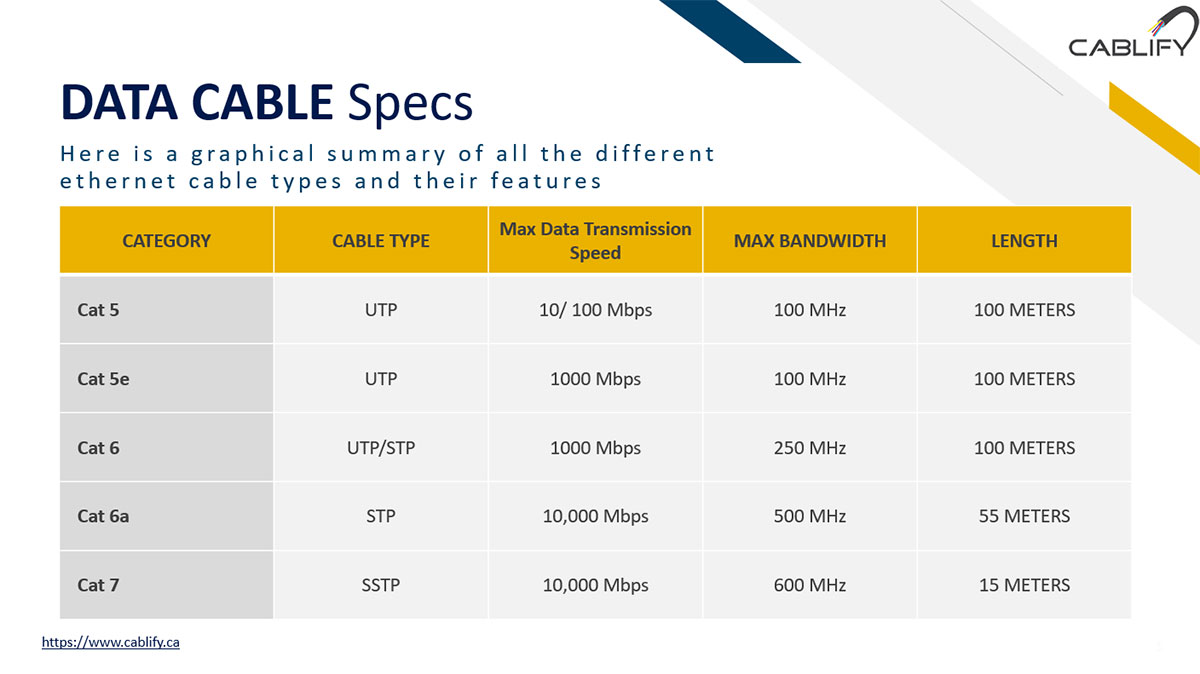 All these cables use the same RJ-45 connector and are backward compatible. The difference for each data cable is basically the rated performance. Let’s go over all the different types of ethernet cables you may come across from Category 5 to all the way to Cat 7 and beyond.

The first one in the list is Cat5 cable which is really common, however, these days when someone says Cat5, he is probably referring to the newer version which is the enhanced version Cat5e. CAT5 cable is actually obsolete and you probably can’t even find anymore except old installations. CAT5 cable is only rated for up to 100 Mb per second at 100 m maximum lengths and with a 100 MHz bandwidth. So obviously only being rated for 100 Mb,  you’re almost going to never to see these anymore because these days 1 to 10 GB is the standard bandwidth speed and if you’re still using one, you should definitely replace it because is in addition to having a slower speed also might be less reliable than other data cables.

Next in line is CAT5 E Cabling where E is referred to as the Enhanced version. Cat5e cable was very popular and still being used widely in most offices, homes and warehouses. This Cable is rated for 1 Gb speeds for a distance of 100 metres or 300 ft as opposed to Cat 5 which is just 100 Mb at 100 MHz. Cat5e has improved specs regarding twisting of the wire pairs inside, shielding and other improvements which reduce crosstalk or the interference between the different signals which would reduce the speed. Also, a regular CAT5 cable only required two twisted pairs of wires inside while Cat5e uses four twisted pairs and therefore obviously it can transfer more data. Cat5 and Cat5e are virtually identical in their physical appearance and one cannot figure out the difference simply by looking at these. You can only differentiate via thickness, color, or the material used in the cables.

It is important to note is that the rating certifications are for the bare minimum spec so it’s very possible that a cable will be capable of much more than what is rated for. For example, a CAT5 cable might actually capable of close gigabit speeds if it’s a really high quality premium cable.

Next, we have Cat6 which bump the specs from 1 Gb to 10 GB gigabit at 164 feet. Category 6 cable, commonly referred to as Cat-6, is a cable standard for Gigabit Ethernet and other network protocols that is backward compatible with the Category 5/5e and Category 3 cable standards. Cat-6 features more stringent specifications for crosstalk and system noise. The cable standard provides the performance of up to 250 MHz and is suitable for 10BASE-T / 100BASE-TX and 1000BASE-T / 1000BASE-TX (Gigabit Ethernet). The cable contains four twisted copper wire pairs.

Cat6 cabling is currently the most popular Network cable being used for new installations and upgrades. You can use FT6 rated cable for plenum rated locations and FT4 for open locations or non-plenum ceilings.

Cat6a data cable is the latest iteration of Ethernet Cabling. The a stands for “augmented” and this cable has improved specifications compared with its predecessor, the Category 6, or Cat6 cable. The Cat6a doubles data transmission bandwidth, from 250 to 500 MHz; decreases the chance of crosstalk interference; and provides superior reliability and transmission speeds through greater lengths of cable. These cables are very thick and difficult to run as compared to Cat6 or cat6e. Cat6a cable is available as CAT 6A UTP and STP. In the STP cable, the shield surrounding the pairs in the STP cable helps prevents electromagnetic and radiofrequency interference (EMI/RFI) from coupling onto twisted pairs. This can help to eliminate the effects of noise from sources like machinery, generators, or medical imaging equipment, making STP systems an ideal choice for industrial environments and healthcare facilities. CAT6A is also backward compatible with CAT6 and CAT5E, however, speeds are always limited and will perform to the lowest category cable or connector that is installed in the link.

Cat 7 Cable with compatible network hardware, can operate at up to 40Gbps at distances up to 50m, and 10Gbps at lengths up to 100m.